Great name for a set of rocks. My choice is limited as the Ordnance Survey has (so far) failed to plot these rocks on the 1:25000 Explorer maps. That being, they have taken to be known by the effectionate name of the ‘Miniscule Sausage Area‘ (SX 2572 6933). It is the name provided in the latest Climbers Club climbing guide to Dartmoor, and as far as I’m concerned it will now stick. How long before OS have to accept that the rocks exist and have to name them as per the choice provided by the nation. Not quite ‘Boaty Mc-B’ but potentially a name to be presented to the cartographer when Dartmoor is next re-surveyed and they find the missing rocks. 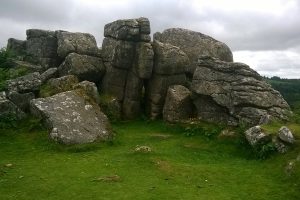 The photograph is of the eastern profile of the Miniscule Sausage. The western profile is even more impressive but not as accessible when the bracken has grown in June. Good low-grade bouldering is available at this crag, mostly on the western face however the two tallest blocks in the centre of this image provide a rather satisfying F4 problem with a relatively good landing.